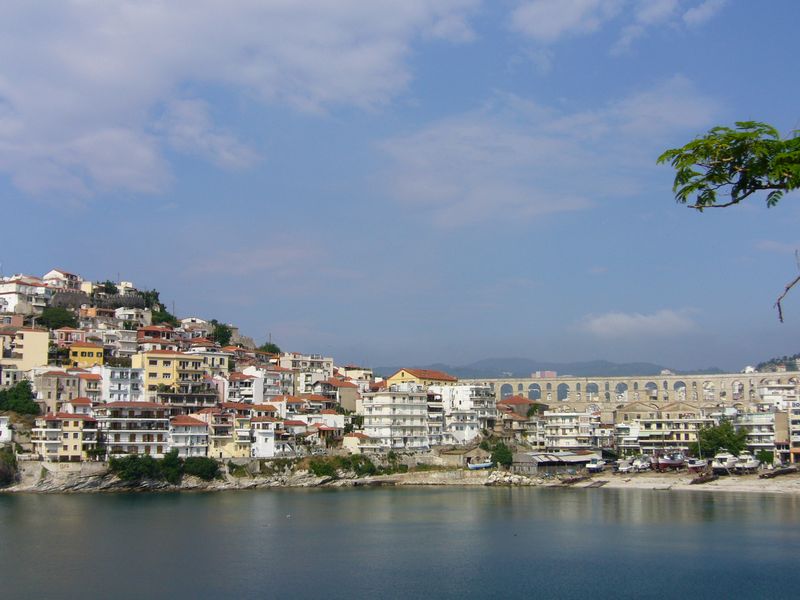 I had to wait another day for the part as our Pajero had a stronger spring and a longer shock absorber than the standard so they didn’t have it on stock, but they get it by next morning. And the part was half price than back in Hungary, I wonder why…

Anyhow, since I had to wait I drove back to Kavala and spent an unplanned night there on the beach (what a disaster) and relaxed a bit.

Saturday morning they quickly changed the shock absorber, I got a coffee and played with the mechanic’s kids. And finally paid a very low labour fee, again, half price.

After we said goodbye I was off towards Turkey. The border crossing took only half an hour and the visa was only 15 Euros for a multiple one (2 years ago it was five hours and the visa was 40 Euros for a single entry, so things go the positive way here). As usual, I had to chat with the border guards but after 2 Puskas, 1 Albert and 8 “ah, Macaristan” and lots of smiling, was on the way towards Istanbul.

I previously decided to drive only till Tekirdag as it’s an important site for us Hungarians and we had no chance so far to have a look at it. We stopped there once but arrived at 1AM and left at 7AM, so no sightseeing.

Turkey is surprisingly big and you realize it once you drive around the country. For fans of numbers:  780500 square kilometers and 73 million people. Quite interesting that even today and despite the growing tourism 80% of tourism is local.

And now it’s low/pre-season, and weekend, so zero foreigners, lots of locals and me. Everyone is incredibly kind and try to grab the oppotunity to use their school-English. I can’t understand Lonely Planet, they say it’s a dangerous country in general. Well, I don’t know where the authors have traveled but I never felt danger anywhere.
OK, the turks say the Kurdish eat Turks. (Actually the Serbs think the Albanians eat Serbs.) We have spent enough time among kurdish people and we are all alive.

Locals here very much take care of the Hungarian-Turkish relationship and history, another good example was 3 years ago the Kossuth house in Küthaya, and here the “Rákóczi kaddesi”, the place where Ferenc Rakoczi II lived and died in exile. And everyone knows what this is all about. OK, they were invaders and ruled in Hungary for 150 years, but you know, it’s like the Monty Python’s Life of Brian, where the leaders of the Judean People’s Front ask the question: “What have the Romans ever done for us?” One of my favourite scenes. So we like it or not we learned a lot from them.

So,  scouting part I is completed and finished a bit East of Istanbul. Part II is planned for mid-June.