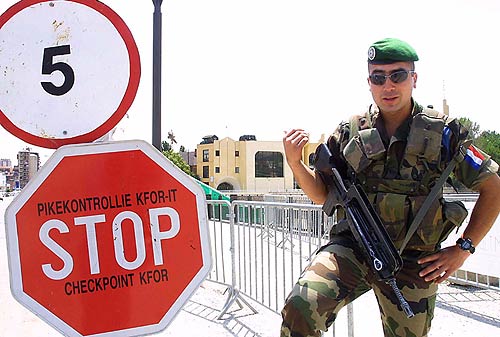 This is how Serbian Foreign Minister Vuk Jeremic phrased their situation implying on Kosovo’s status for Serbian people.

“Kosovo has a deep historical and spiritual meaning for the Serbian people, it is, in a way, our Jerusalem. We cannot accept unilateral conclusions by those governing in Pristina,” he said.

Well, this is a good example of the completely different thinking on the two sides of the Ibar river. The bridge over that river is not connecting but separating the inhabitants of Kosovska Mitrovica and – symbolically – Serbia from Kosovo.

There was a serious threat for conflict on May 30 and only the KFOR and EULEX forces prevented the fight between Albanians and Serbians.

This situation alone is interesting for the participants of the Caucasian Challenge, but what makes it even more interesting that the folks on the 2 sides of the river are pretty pissed off each other nowadays. And we’re going to cross this town on Day 2 of our challenge.

We are not even surprised reading the news, it seems that ethnical and political conflicts or natural disasters follow the route of the Caucasian Challenge each year.

In 2008 right before the start the Russian-Georgian war bursted out, luckily it more or less calmed down before we got there. Same year there were fights between Karabakh and Azeri forces on the frontline, again, a couple of months before we arrived there.

Last year an earthquake of magnitude of 6.2 on the Richter scale struck Northern Georgia, not far from the place we stayed that time. Then just before we were leaving for Europe again, we heard about the devastating flood in Turkey, stopping some of the teams around Istanbul.