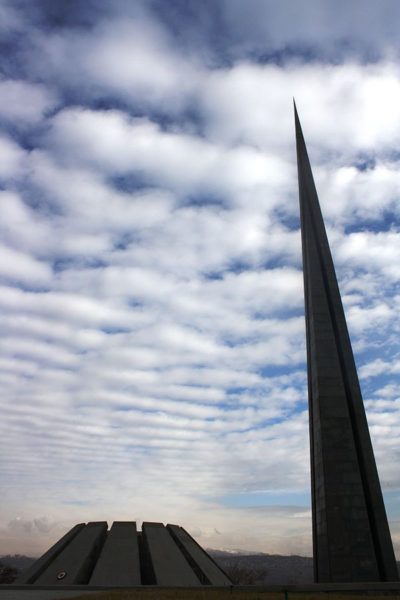 The Armenian Genocide Complex is found on Yerevan’s Tsitsernakaberd hill.

At Tsitsernakaberd you can find both a monument to, and much information about, the most traumatic time in Armenian history. The site is an essential place to visit on any visit to Yerevan, although it can obviously be an upsetting experience. On Armenian Genocide Remembrance Day (April 24th) thousands of Armenians gather at the site to pay their respects.

The Armenian Genocide occurred predominantly between 1915 and 1917 (though it continued in some form for several further years), as the Ottoman Empire killed over 1.5 million Armenians, and deported many more. There have been debates regarding international recognition of the genocide ever since. The Armenian Genocide Complex was built much later, to remember the victims but also to emphasize the importance of recognizing the tragedy. The Soviet Union, of which Armenia was part for most of the 20th Century, only agreed to the building of a monument in the mid-1960s, in response to protests in that marked half a century since the peak of the genocide. The museum wasn’t built until the 80th anniversary of the genocide, in 1995. In the above photo, the museum is the lower structure, built into the mountain. It is deliberately hidden so as not to distract from the Armenian Genocide monument, which you can see above, partly in scaffolding.

The monument consists of a 44 meter granite needle, representing “Reborn Armenia”. Beside this, you can find a circle of twelve massive slabs (designed to mimic traditional Armenian stone ‘khatchkars’), representing the twelve lost Armenian provinces. The slabs lean inwards, as if bowing in mourning. At the center there is an eternal flame, and the steps which leads to the lower platform are steep, ensuring that visitors must bow their heads as they descend. When visiting, the sense of being enclosed by these slabs creates a powerfully sorrowful atmosphere.

Every year on the 24th of April, thousands gather at the Armenian Genocide Complex to pay respects and lay flowers. There were particularly notable commemorations in 2015, marking a century since the event. Atop Tsitsernakaberd hill, with views across Yerevan and on a clear day all the way across the border to Mount Ararat, the national symbol of Armenia, the monument is superbly positioned. Nearby there is a memorial garden, with plaques dedicated to foreign officials who have recognised the genocide. As if the atmosphere wasn’t sombre enough, a sound system plays melancholic traditional music.

If visiting, you will undoubtedly spend the most time in the museum section of the complex. The Armenian Genocide Museum is free, with information (and guided tours) provided in English, Russian, and French, in addition to Armenian. It is open from 11am to 4pm daily, except for Mondays and various public holidays. While there are not many original artifacts, there is a thorough and useful run-through of the history of the genocide and the lives of the Armenians a century ago. The museum’s design, in particular the way light enters the space through cross-shaped-holes in the walls, creates a poignant environment. Though the story told and pictures shown are naturally distressing, the museum is nonetheless an essential stop on any visit to Yerevan.

If you are interested in the history and culture of Yerevan, Armenian, or the entire Caucasus region, sign up for the Caucasian Challenge, a minimal assistance adventure rally organised by the Travel Scientists. Departing from the cosmopolitan edge of Europe, Istanbul, teams travel across Northern Turkey, before exploring Georgia, Nagorno-Karabakh, and Armenia. You’ll drive some of the most stunningly remote roads in the region, see bustling ancient capitals, and be treated with the local’s famously generous hospitality.