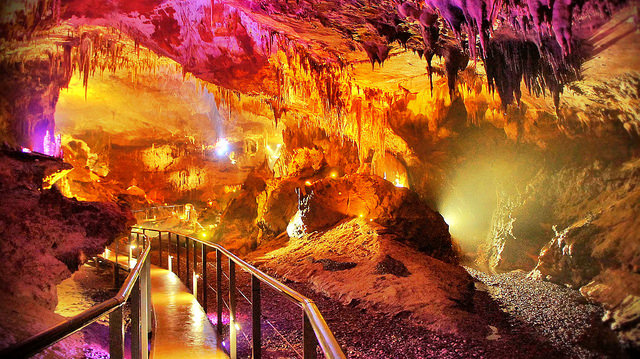 Prometheus Cave, near Kutaisi, is Georgia’s biggest cave*, and offers an enchanting experience.

In Greek mythology, Prometheus gave life to mankind by gifting them the fire he stole from Mount Olympus. According to myth, Zeus punished Prometheus by ordering him to be chained, with unbreakable bonds, to a rock somewhere in the Caucasus. Could it be that the location of his eternal imprisonment was Georgia’s biggest cave? That’s certainly what many Georgians believe, and in any case a visit to the cave is a mesmerizing experience. Here’s what you need to know.

The history of Georgia’s biggest cave

Prometheus Cave, sometimes known as Kumistavi Cave after the nearest village, was discovered in the 1980s by local students. For years locals had noticed pets going missing; it turned out they were falling into the cave network. Various political upheavals in Georgia meant that the work required to make it fully accessible to the public was only completed in the past decade. It’s a great boon for Georgian tourism that they are open: the vast caverns, filled with interesting rock formations and underground rivers, are some of the most impressive in Europe. The caves have a natural temperature of 14 degrees Celsius all year long, so visitors can appreciate the spectacular interior in relative comfort.

What is there to see?

The visitor center offer guided tours of the cave, where you can explore six chambers travelling along a well-kept path. The cave is accessible for anyone over the age of six: you don’t have to sneak through any tight passages, or wade through any water, and you certainly don’t need to wear a hardhat! The cave features an impressive LED lighting system, brilliantly illuminating the various caverns. A sound system plays classical music, creating a rather special experience as your guide walks you through the cave, pointing out the many stalagmites and stalactites (and the difference between them…)! The path is over a kilometer long, and tours are available in Georgian, Russian and English. Best of all, so long as there hasn’t been unseasonably high rain, the tour finishes with a boat tour along the underground lake.

How to get to Prometheus Cave 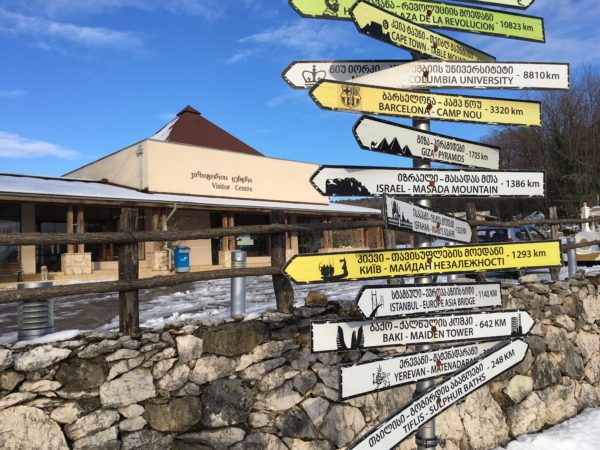 The caves are not too difficult to find, despite not being quite as central to world geography as the ambitious signage (pictured above) outside their visitor center, suggests. The caves are located half an hour’s drive from Kutaisi (which itself is several hours drive from Tbilisi). If you are travelling by public transport, there are regular minibuses from Kutaisi travelling to the spa resort of Tskaltubo, the nearest town to the caves. This was in fact a destination beloved by Stalin, so it may be worth a wander around itself — you can even visit the single remaining bath complex or learn about the town’s history in the “Museum of Local Lore”. If you’re just interested in Georgia’s biggest cave, however, there are regular minibuses from the town’s central market.

The cave can easily visited by participants of the Caucasian Challenge minimal assistance adventure rally, which stops for a night in Kutaisi. Teams on the driving challenge travel from Istanbul to Yerevan, the capital of Armenia, via Georgia. Participants drive incredible roads amid breathtaking scenery, encounter the varied splendors of the region — from the gloriously remote mountain villages of Svaneti to the bustling capital Tbilisi — and experience the famously generous hospitality of the locals. There’s so much to see, from ghost towns of Nagorno-Karabagh to, of course, Georgia’s biggest cave!

*Excluding the breakaway region of Abkhazia, home to some of the largest caves on Earth.