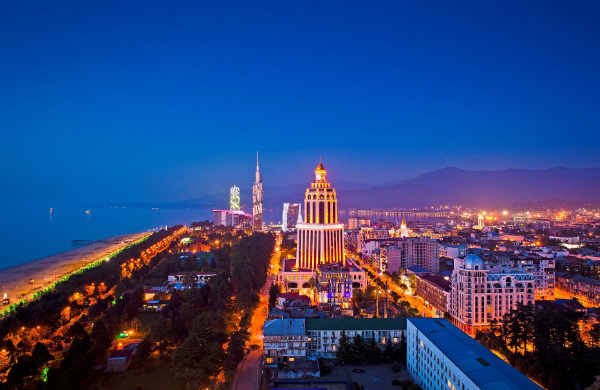 The Top 10 things to do in Batumi, Georgia’s premier seaside resort.

Batumi is where Georgians go to relax: there’s sea, sun, and in summer there’s no better place to party. Its bright lights, eye-catching modern architecture and its many casinos have earned Batumi a reputation as the “Las Vegas of the Black Sea”. The Adjarian capital is the first stop in Georgia for the Caucasian Challenge, and it’s the perfect introduction to the beauty and hospitality of the region. Here are the top 10 things to do in Batumi!

There are stones rather than golden sands, but in peak summer it’s still a fight to find a place on Batumi’s prime real estate. Sun worshipers stay there from dawn to dusk, with brief excursions to frolic in the water or chill at beachside bars. There are sun loungers and pedalos to rent. If the crowds are too much, there are more isolated beaches not far away. Wherever you are, make sure to look out for a stunning sunset west over the black sea.

2) Walk or cycle along the boulevard

If the beach isn’t for you, the next best place to admire the early evening sky and to experience the sea air is Batumi boulevard, stretching for 7km along the coastline. With sections dating back over a century, the boulevard is a hive of activity, lined with restaurants and cafes. Look out for Greek style colonnades, sculptures, and the popular dancing fountains. Most people take a stroll, though there’s space enough for cyclists too!

3) Marvel at the strange architecture

If you walk northwards up the boulevard, with the black sea to your left, ahead you’ll spot some of the weird and wonderful architecture for which Batumi is famed. After the Rose Revolution in 2003, new President Mikhail Saakashvili had big plans for his favourite seaside resort. One of his pet projects was the tower intended to house the Batumi Technical University. However, the 35-floor building never met education standards, possibly because it’s upper floors are dominated by a functioning ferris wheel! It’s soon to become a hotel.

A slightly more successful project was Alphabet Tower, a metallic structure encased a double helix inscribed with Georgian letters, celebrating how the Georgian’s unique language is part of their DNA. An elevator rises to the top, but views are obscured by glass panes. Strangely, the final must-see building is the local McDonalds! If it weren’t for the sign you might expect the glass oddity to house a villain’s secret lair, rather than serve burgers with fries. Regularly called the “world’s coolest McDonalds”, it’s even better on the inside, where customers are surrounded by a canopy of flowers.

4) See the moving statue of Ali and Nino Literally moving. Just past the end of the beach, at the corner of the seafront promenade, two metallic figures slowly merge then separate, all day. They are Ali and Nino, the lovers of the famous novel that bears their name, telling of a doomed romance between an Azeri boy and a Georgian girl. It’s worth seeing for the creative subtlety of the design, which leaves spectators to puzzle at how the figures seem to pass right through each other: it’s also surprisingly emotive.

If you ever want to escape the buzz of the city, the natural paradise of Batumi’s Botanic Gardens are the perfect place and they’re an obvious choice as one of the top 10 things to do in Batumi. Only ten minutes drive away, they cover over 100 hectares sloping towards the sea, and make the most of Batumi’s subtropical climate. There are sections representing the nature of exotic lands including East Asia, the Himalayas, and Mexico. The views towards the sea are spectacular, particularly at sunset.

6) Take a ride on the cable car

To see Batumi from a different perspective, the sky, take a ride on the Argo cable car. Departing from the harbour, you are transported 2km to Anuria mountain, 250m above sea level. There you can enjoy spectacular views of surrounding greenery, Batumi city, and outwards to the Black Sea. At the upper station there are several shops, and a cafe serving traditional Georgian food.

7) Take your pick at the authentic fish market

On your way back from the Botanic Gardens, stop off at Batumi’s fish market to eat like Georgian’s do (by the sea at least). Choose from that day’s freshly caught haul, and it’ll be cleaned for you. Then, right beside the stall, they’ll cook it for you too! It doesn’t get fresher, though it can be a little bit of a wait. In the meantime, play some backgammon with a local!

Fish isn’t the most important dish you must try in Batumi, however. All across Georgia you’ll encounter khachapuri, their traditional cheese-filled bread, usually pizza shaped. In Adjara, the coastal region of which Batumi is capital, they have a fitting variation: it’s boat shaped, with two pointy ends of dough, a hot cheesy centre, and topped with a fried egg. It’s available all over Georgia, but it tastes far better local!

9) Have a drink in the Piazza then admire Europe Square

A recent development in Batumi is the creation of a European-style piazza right in the centre of town. A mixture of European and Georgian architectural styles, this space is is filled with luxury hotels, fancy restaurants, and sophisticated cafes. This is a hotspot in the evenings, and there are frequently concerts held by local and international musicians.

Larger concerts are often held at Europe Square, named when Georgia joined the Assembly of European Nations. Look up at the astronomical clock, which shows the locations of sun and moon in addition to the time. While many buildings in Batumi are an acquired taste, Europe square is a genuinely attractive sight.

The Batumi Dolphinarium is regularly considered by tourists to be among the top 10 things to do in Tbilisi. It’s located by Nurigeli Lake, in the pleasant 6th May Park. In summertime there are three performances per day, with seating for up to 700 spectators; still, it’s worth buying tickets early. If you’re willing to pay extra (prices starting at 60 lari for under 12s) they’ll let you swim with the dolphins.

If the top 10 things to do in Batumi sound fun, you’re right, and the best way to see the city is by participating in the Caucasian Challenge. Starting off in Istanbul, the minimal assistance rally reaches Batumi, then weaves through Georgia before heading south to Armenia. As well as Batumi you’ll see mountainous Svaneti including scenic Mestia, and of course the capital Tbilisi. You’ll see beautiful scenery, experience the famous local hospitality, and have a lot of fun along the way!