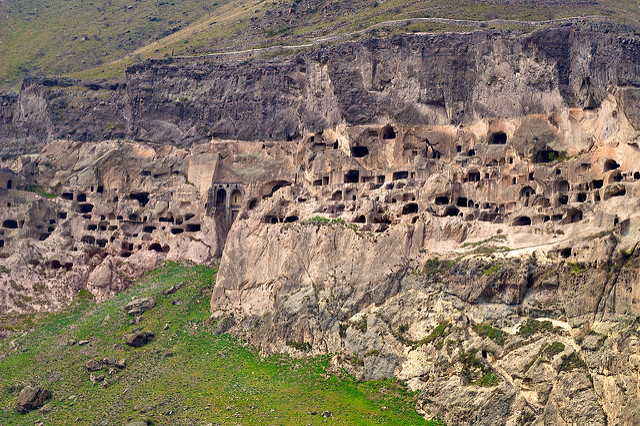 The Cave City of Vardzia is a vivid reminder of Georgia’s fascinating history. But what was it for?

Cave cities are always an astonishing sight, a fascinating glimpse into an ancient way of life, and the cave cities of the Caucasus are no exception. Georgia actually has three prominent cave sites and while Uplistsikhe is older, Vardzia is by far the biggest and most impressive. This vast set of caves date from the 12th century, Georgia’s golden age, and are unsurprisingly a UNESCO world heritage site.

The Story of the Cave City of Vardzia

What is surprising, though, is that this glorious 13-story rock-cut complex was hidden under the dust and soil for several centuries from the time it was sacked in the 16th century until excavations in the 1930s. Currently the whole area is 40 thousand square meters wide; however, archaeologists and historians are certain that it was almost double the size until a massive earthquake in the late 13th Century. The magnificent ruins indicate a prosperous economy: the cave city of Vardzia includes 79 separate cave dwellings, including 300 rooms on more than twenty secret tiers. There is a stable, a pharmacy, several chapels, the remains of a bakery and more than twenty wine cellars. The star attraction is the main church, complete with frescoes and half a bell-tower. Currently, visitors can access all these places, and hand-rails have been added both on outer walkways and within some of the many tunnels.

Is it a Monastery?

While historians have closely studied the cave city of Vardzia, and discovered much about how life there must have been, there is still debate about what the whole complex was actually for. Many believe that the whole city was a monastery complex and cultural centre befitting the glorious time in which it was built, the “golden age” of feudal Georgia. The neatly carved Church of Dormition is evidence in favour of this. There is a fresco of Queen Tamar, who ruled during the golden age, still remaining. Though impressive, the church is missing a nave, which historians suspect is evidence of the earthquake.  While it’s possible that the purpose of the whole complex is religious, and it certainly is today (several monks still live there!) not all agree…

Or a Military Town?

Another plausible suggestion is that the cave city of Vardzia was predominantly intended as a military complex. Evidence in favour of this includes the fact that the majority of tiers and tunnels were built inside the rock. They weren’t for show, and in fact (before the catastrophic earthquake) the entire town was likely well hidden. It’s certainly in a strategic location, in the middle of the mountains close to the border with the powerful Seljuk Empire. It could well have provided a base for the army, with the church merely serving as a place of worship for those who served. While its defensive position helped protect Vardzia from the Mongols and (until 1551) the Persians, it does seem like an awful lot of work just to house some troops…

It’s also possible that the cave city of Vardzia was neither monastery nor military base. Some claim that the complex was in fact a refuge during fierce wars, which is quite persuasive: surely you’d only go to all that effort if you really needed to. Another legend is that the 366 rooms were all for Queen Tamar, so that she could mislead enemies by sleeping in a different room each night. While historians are undecided, why not visit the city for yourself and make up your own mind. Which version do you believe?

Located 300km South-West from Tbilisi, the cave city of Vardzia is a long but worthwhile daytrip from the capital. On the way you can stop off at the recently renovated castle complex at Akhaltsikhe, after which the scenery is some of the most stunning you’ll find in all of the lesser Caucasus. On the way home, if you have time, you can take the scenic route via the picturesque Paravani Lake. This trip can be done on the rest day of the Caucasian Challenge, the minimal assistance adventure challenge next taking place in August 2017. From Istanbul to Yerevan you’ll drive stunning roads, pass breathtaking scenery, while enjoying the famous hospitality of the region!