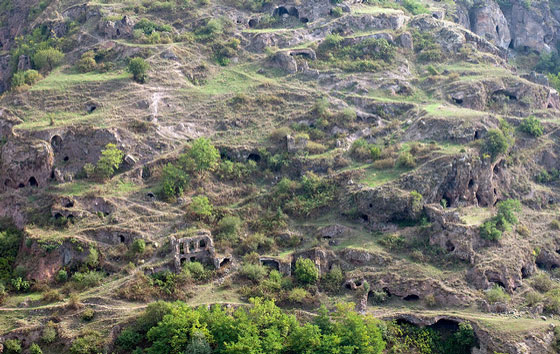 The Caucasus are heaven if you are a fan of caves, and the Armenian cave village at Khndzoresk does not disappoint!

The Armenian cave village of Khndzoresk may not be well known (we can probably blame it’s tricky to pronounce name…) but it deserves to be known as one of the most fascinating destinations in Armenia, and possibly the Caucasus as a whole. Its picturesque location and rich history make it one of Southern Armenia’s must-see stops. Here’s what you need to know.

Is it Inhabited Now?

No, but it was right until the 1950s. In fact, till then, this network of man-made caves was actually the biggest village in the whole of Eastern Armenia. As no level ground was available to build on, the ancient population of Eastern Armenia did the only thing they could and dug into the hillsides, and created the cave dwellings at Old Khndzoresk, which were continuously inhabited up to the middle of the 20th century. Though the caves’inhabitants were content to live there, it is said that Soviet officials in the 1950s deemed the caves uncivilized and unfit for human habitation, and forced the remaining villagers to leave.

Was the Armenian Cave Village all Man-made?

No, the historic cave village is comprised of both man-made and natural caves. At the inhabiting community’s peak, some estimates suggest that population swelled to as many as 15,000 people. Because many of the dwellings were carved out around and over each other, a complex system of ladders and ropes were needed for people to reach many corners of their community. The village even had three schools and two churches.

What Happens there Now?

Nowadays Old Khndzoresk is frequented mainly by local livestock which graze around the caves, some of which have been converted to storage spaces or stables. You are welcome to explore the cave system, but the trip across the gorge is not for the faint hearted. However, making the trip a bit easier if not a bit less harrowing, is a 160-metre long suspension bridge that was constructed using nothing more than local labour and funds in 2012, and which shakes at every footfall. The bridge (below) connects Old Khndzoresk with New Khndzoresk, the modern village, connecting Armenia’s ancient history with the present day, both literally and figuratively.

How Do You Get There?

From Goris, follow the Stepanakert Road east for about 6 km. You’ll pass under a metal gate which announces “Welcome to Khndzoresk” in both Russian and Armenian. At the other end of the village, turn right down the dirt track to Old Khndzoresk. Park at the top of the gorge (by the shop) then walk down the path to the cable bridge. It’s an easy excursion on the route of the Caucasian Challenge.

Join the Caucasian Challenge, and you’ll have a chance to explore the Armenian cave village yourself, as well as the other cave towns of the Caucasus. The minimal assistance adventure challenge is a classic driving adventure, all the way from Istanbul to Yerevan, via Georgia. Be prepared to drive incredible roads, visit remote villages, and enjoy the locals’ wonderful hospitality!