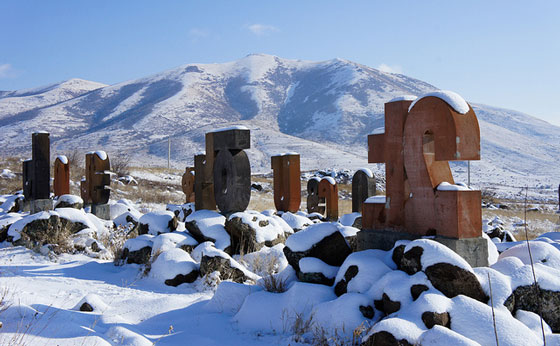 Ever gazed at an Armenian-language road sign and gave three silent cheers for GPS? Or wondered how something so utterly either un-ciryllic or non-latin-like could have materialized in this nook of the world, as if by magic? If so, wonder no more, but fold yourself into your favourite shape and absorb the story of the wiggy whirls whose gigantic stone likenesses adorn the Western slope of Mount Aragats.

Yeah, let’s start there. Why the sculptures?

The giant, hand-carved stone letters – thirty-nine all together – were strategically placed there in 2005 to commemorate the Armenian alphabet’s 1600th birthday, as well as its creator, Mesrop Mashtots. Strategically, because this is near their creator’s final resting place.

What was his motivation in creating such a distinct alphabet?

When he began working on it, he was under huge pressure to come up with something that a bible could be written in – remember that Armenia was a newly Christian kingdom. So he dedicated himself to the task. His overarching and rather elegant idea was to lay out the structure of the Armenian alphabet around the religion.

He made the first letter A, not to follow the latin alphabet but because it was the first letter in the Armenian name for God, Astvats. Mesrop Mashtots then made the final one K, which began the word K’ristos, or Christ. He then painstakingly put the finishing touches on the last thirty-four letters.

Didn’t you say there were thirty-nine?

Yes – three more letters were added later, but apart from that, his system has been used ever since. So to honor his work, Armenian architect J. Torosyan made the stone carvings of every letter in the Armenian alphabet near Mashtots’ final resting place in 2005. Against the backdrop of Armenia’s Mt. Aragats, a statue of Mashtots and the letters pay tribute to the unique and complex language, a national point of pride of Armenians everywhere. The complex also includes other monuments to the great Armenian thinkers.

What kind of stone are they made of?

All the statues and letters are made of Armenian tufa. The uniqueness of the letters reflects that of the Armenian language, which is an independent branch in Indo-European language family. It is used in Armenia, Javakhk, Nagorno-Karabakh, and  in communities of the Armenian Diaspora around the world.

A rich literature has been – and is still being – created in the Armenian language; these are writings of ancient, medieval and modern civilizations that have enriched world culture.

What is the name of the nearest city?

Artashavan village. It is in the Aragatsotn region, on the Western slope of Mount Aragats, which is less than an hour by car from Yerevan. Something of an ideal encore to the Caucasian Challenge.