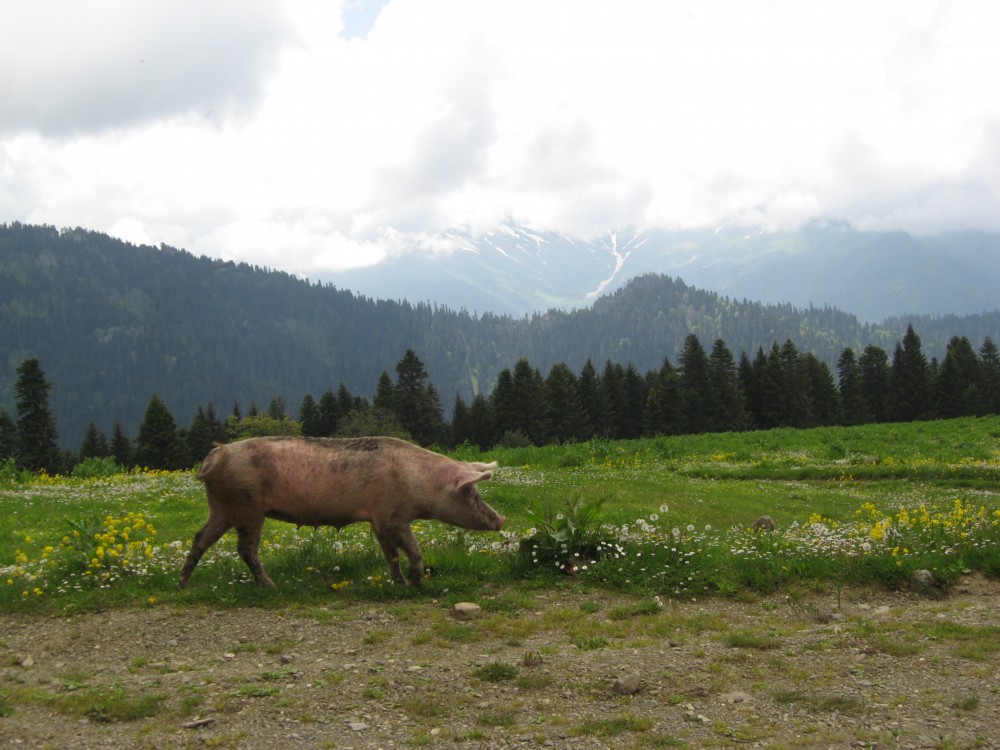 There was no iternet for 2 days so I upload all these from Tbilisi.

The route through the national park was more difficult than I remembered from last year.. or it’s the same and only my memories fading. Not long after I started to climb the mountains from Kutaisi (I did the rout backwards, the rally will go from Batumi to Kutaisi) there were huge constructions, lots of people busy with everything that comes with construction. Machines on the road, people running around, etc. It seems someone really wants to invest into this (otherwise beautiful and relaxed) place… it used to be a mountain resort place and apparently it will be again.

Surprise came when I saw a chain across the road. There was a guy in a security uniform asking where the hell I wanted to go.

Guard: Where are you going?
Me: To Abashtumani thought the mountains.
Guard: Abashtumani? Through here?
Me: Yes, why not?
Guard to Guard 2: Hey, there’s a Russian (!) boy here who wants to cross!
Guard 2: So what’s the plan?
Me: (telling the same)
Guard2: Do you know the road? Have you been here before?
Me: Yes, I know the road.
Guard 2: But did you ride it this year yet?
Me: No…. why?
Guard 1 and 2: Hm… probably he can go, there was one car yesterday from the other direction…. (to me) OK, have a nice trip!

It seems I was one of the first people crossing the mountains after Winter (when it’s closed due to snow)… and indeed, there were traces of snow so it might have been unpassable like 2 weeks ago. That’s one reason I do the mapping mid-June, we couldn’t cross 2 passes 2 years ago.

The route was again fabulous, completely remote and only nature around me. But the road was tricky at some points and my average speed was something like 1. It did worth all the efforts. And you know how many people/vehicles I met? Yes, exacly: zero.

Another joke was the ranger at the other sifde of the park, opening the gate asking me where I was coming from.
I said from Kutaisi. „And the road was open??”-he asked. „Apparently yes”- I said. „Hm… I thougth it was still closed”-he said. Nice, he should be the one knowing what’s going on.

I continued to Batumi on the road that leads through Adjaria, climbing another pass with 3 meters high snow walls next to the road. That part is easier than the national park but all in all that day was exhausting.

I arrived to Batumi around 10PM, and was driving around for about half an hour before I found my way to the hotel where I stayed 3 times before.
That city changed a LOT in the past years! It seems that it wants to be the Las Vegas of the East… new promenades with blue led lights embedded in the asphalt, every single palm tree is lighted with disgusting light green lights, new buildings with rainbow coloured light show. Definitely money is around without style. But it has its own… special charm.

Next day I woke up much later then I wanted, so only left the city (after some shopping etc.) around 1. The goal was to go to Mestia, one of the all time favourites in Georgia. The view of the mountains are great, most of them still covered with snow.

Excellent drive, though they continue building the road connecting Mestia with the world. Really good for tourism cutting the 5 hour drive from Zugdidi, but in a way they ruin our game, meaning offroading/dirt driving in the mountains. Anyhow in Georgian terms there’s a great construction going on, they still worked after 7PM all over the region.

They told me it should be finished by the end of Summer but I have serious doubts since they haven’t even started at some points and we talk about around 100 kilometers. But let me be wrong, we’ll see.

Mestia is charming as always but getting more touristic, new hotels being built, cafés opened, etc. I had a great dinner at Tea’s guest house (the place we always stay), had some local chacha and some beers, chatting with some travelers from Poland and Israel, finished my last beer on the terrace overlooking the loud Inguri river and wished I had a house in the village. With or without an ancient tower.

Uploaded some photos to our Facebook album, will do more soon!