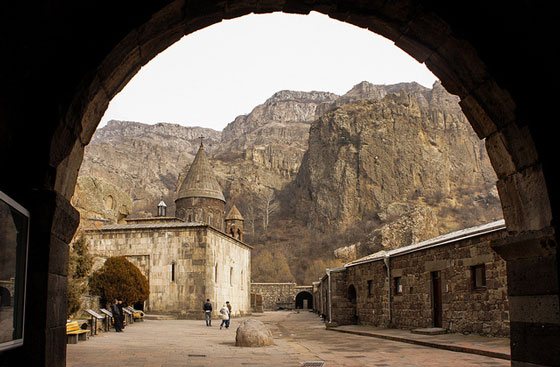 Adjacent to the gorgeous Garni gorge is Geghard Monastery, – named after the spear that stabbed Jesus – , an equally spellbinding sight that was carved out of cliffs in the 4th century A.D. The Geghard monastery complex is cut into the rock, which illustrates the very peak of Armenian medieval architecture. The complex is set into a landscape of astonishing natural beauty and surrounded by towering cliffs at the entrance of the Azat Valley.

Was Christianity the official religion in the Middle East then?

At the turn of the 4th century? Nope, only Armenia had ruled to make it so. The nation was led to adopt Christianity by Gregory the Illuminator, who baptized the Armenian royal family in 301; Armenians plunged into religion, started collecting artifacts and building/carving spectacular monasteries up and down their country.

And the Geghard Monastery was one of the first.

Indeed. It started out only as a small cave chapel, which, according to Gregory, held a sacred spring in the 4th century. This is what spurred Armenians on to carve an ornate and massive complex of buildings out of the rock here, an effort that continued for centuries.

The main architectural complex consists of the cathedral, the adjacent narthex, eastern and western rock-carved churches, Papak’s and Ruzukan’s tomb-chapel, the family tomb of Proshyan princes, as well as various cells and many rock-cut cross-stones.

The main church is in the classic Armenian style, an equal-armed cross inscribed in a square and covered with a dome on a square base, then linked with the base by vaulting. The eastern arm of the cross ends in an apse, the remainder is square.

The internal walls are covered by many inscriptions recording donations over centuries. The masonry of the external walls is particularly finely fitted and finished. An entrance hall links it with the first rock-carved church.

When was the main section one added?

The main and most prominent chapel was built in 1215. The stone monastery, partially carved out of the rocks on all sides, melds beautifully with its craggy surroundings and stands out among the outcroppings above.

Were they all built with the same technique?

Yes, the buildings in the complex are a mix of intricate Armenian stonework and carved crosses juxtaposed with simple cave chapels. The mix gives the building complex a feeling of antiquity, especially when combined with the relics this area once held.

Geghard comes from of an Armenian word meaning Monastery of the Spear. The monastery was named after the spear that was used to wound Jesus during the Crucifixion. According to lore, the spear was brought to Armenia after the Crucifixion; it is now housed in the Echmiadzin Treasury, the spiritual center of Armenia.

I am surprised that the monastery’s been so well preserved.

Yes, The Geghard monastery is an exceptionally well preserved example of a medieval monastic building in a remote region of great natural beauty. There have been no changes to the components of the inscribed property complex since the time of inscription. Also, the property is surrounded by a substantial buffer zone, which was established in 1986, where there are strict controls over any form of change and development.

However, it is in an active seismic zone, and the pollution of the surrounding environment, the risk of rockslides, as well as the active tourism route are the main threats to the integrity of the monastery. So if or when you come to visit, perhaps as part of the Caucasian Challenge, tread lightly. Future generations will thank you for it.