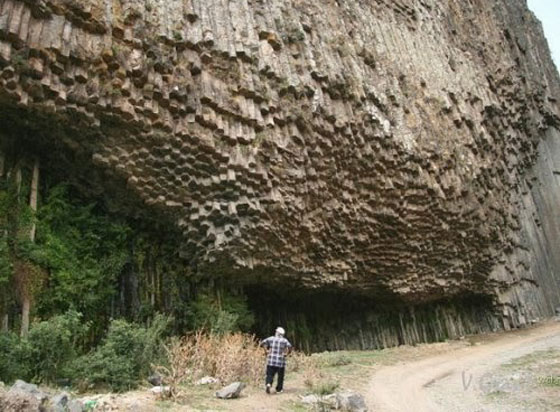 Just to the southeast of Yerevan lies a piece of geological oddity, a place at once puzzling and awe-inspiring, like some giant celestial sculptor’s discarded toy that he made for his own entertainment.

What’s different about it?

Reckon you’ll agree that’s pretty unique. And no, it’s definitely not man-made. The canyon was carved out by the Goght river, but it isn’t entirely clear how the multitude of basalt pipes ended up so wonderfully, uniformly octagonal. At any rate, it’s an absolute must-see if you find yourself in Armenia.

I’ll give you that. Is it hike-able?

It is, though not many people know that. Though you can enter the Garni Gorge on foot by taking a rough, steep path from the left side of the temple parking lot, you can also drive.

How to get down into the gorge?

The entrance is reached by taking the paved road to the right about one km west of Garni. Carry straight over the bridge, then turn left at the cement wall (if you go straight, you’ll get to a mysterious Physics Institute), and left again on the dirt trail where the dachas begin. From here, a narrow dirt road, barely passable for regular cars, descends into the gorge and east along the river, past pleasant picnic places and wonderful rock formations, joining up with the other road from Garni village.

When you get to the bottom of the gorge, if you turn right, the path will take you along the Garni river, to the 11th century medieval bridge, colonies of house martins and and swifts, more picnic spots, lush greenery, then – yay! – the basalt cliffs themselves.

And the temple above?

You can reach it on foot in about 4 hours. It’s not the easiest of hikes, so do take food and water. And make sure you have plenty of memory left in your camera, because the temple is breathtakingly beautiful, especially at around sunset.

Okay. What should I know about it?

Almost anyone who comes to the Garni temple thinks it is a 76 AD temple and Roman style baths. But many learn when they visit it that the cyclopic stone walls that stand around the royal summer residence and temple were in fact first placed there in the 3rd millennium BC, not by Greeks but by ancestral Armenians who developed the region into one of the greatest trading and metallurgical powers in Asia Minor and Mesopotamia.

It’s the only non-Christian temple in Armenia, no?

That’s correct. It was built on top of an Urartian temple, and shares the same floor dimensions as the temple of Sushi in Erebuni (5.05 X 7.98 metres). Like every sacred structure built from oldest times through to the Christian era, it is oriented to the East, that is, to the rising sun.

The temple of Garni was dedicated to the sun goddess Mythra. Pre-Christian Armenians shared Zoroastrian gods with Persia (and by the time the Garni Temple was built, with the Eastern Roman empire, which had adopted Mythra as their patron goddess), and worshipped fire as an ultimate gift from the gods.
Also important to know is that Garni was designed according to the laws of the sacred geometry of the day. It follows perfectly the Platonic and Pythagorean theories of sacred geometry in its design, one for civilization carved form the wilderness. If you’re at all interested in history, sacred geometry, or experiencing something man-made-yet-majestic, it’s a must. Visit it next year with us on our Caucasian Challenge.