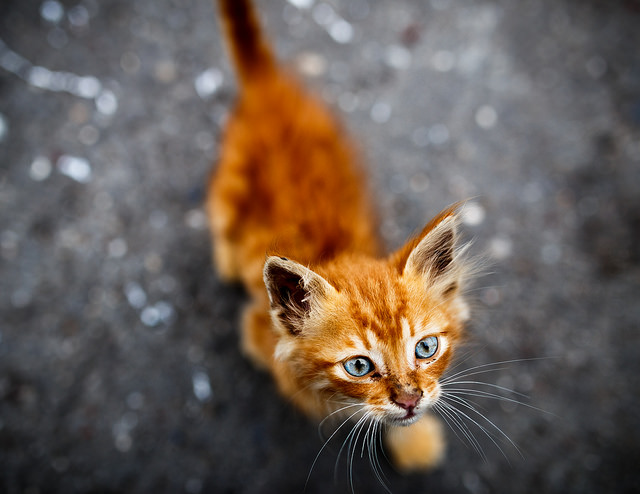 If you have ever visited Istanbul, then you know them: the hundreds and thousands of cats roaming every last of Istanbul’s streets day and night, summer as winter, ever since the foundation of the city more than 2000 years ago. They come in countless sizes, shapes and characters and have deeply influenced Istanbul and its humans, wandering into their lives and leaving them again as they please, forming unique relationships and, of course, abusing them as a can opener for those days when laziness overcomes a cat’s hunting instinct.

It is no coincidence that an Islamic city is the cat capital of the world. According to legends, Mohammed himself was a passionate cat lover, so taking good care of cats has deep roots in this religion. There are countless variations of the tale, one of them goes like this: One day, when the azzan called him for prayer, Mohammed found his favorite cat Muezza sleeping comfortably on his prayer robe. In a desperate attempt not to disturb her, he rather cut off the sleeve of his robe than to wake her. Who of us doesn’t know this dilemma!

It is also said that Muslims even owe the live of their prophet to the cat of one of his companions, Abu Hurairah (meaning: father of kittens), which chased away a poisonous snake. Gratefully Mohammed stroked the cat and therefore blessed it with seven lives and the righting reflex – the ability to land on their four legs, not matter what. Haven’t we all wondered how that mystery of nature has developed? Now you know!

Cats have found their way into aspects of all kinds of Islamic arts, literature, coins, jewlery and even more important, into the daily lives of people. They are valued as companions, healers and guardians of knowledge – hunting mice which used to nibble on precious manuscripts of ancient scholars.

No other animal has made us love it and completely accept it with all its flaws like cats have. One second they scratch us, next second they are purring on our lap, making us completely forget about their dubious character. Especially those wandering between the worlds, living in absolute freedom on the streets and still forming a certain connection with humans, if they choose so, have taken our hearts. I am sure we can all agree, that it was about time to dedicate a full movie to those amazing, fluffy creatures and finally here it is: Kedi or Nine Lives – Cats in Istanbul.

The movie, which recently premiered at the 15th Istanbul Film Festival, doesn’t only introduce us to Istanbul’s felines, but also to its various neighborhoods and to the people who care for the adorable fleabags, which might want to convince us of being completely independent, but never say no to some cat food or a stroke. It is a love letter to the city, the cats and its inhabitants

Kedi is planned to be introduced to the international market soon. Let’s hope it won’t take too long! But till then, why not cuddle with some felines yourselves and explore Istanbul first hand? And when you are already in the area, don’t miss your chance to embark on an epic adventure race across the Caucasus afterwards, starting in the City of Cats!