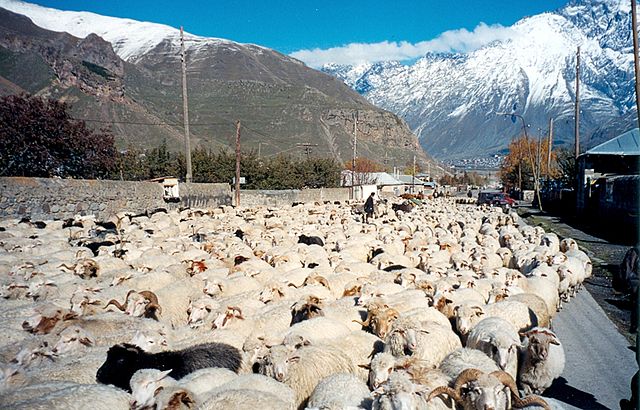 The Georgian Military Highway is the fastest route from Tbilisi to Russia, but there are plenty reasons to drive it even if you don’t want to leave Georgia!

The Georgian Military Highway is the fastest route from Tbilisi to Russia, but it’s no ordinary motorway. It can be a challenging drive (thanks to snow, or sheep…) but also a very worthwhile one. You’ll pass varied scenery, from remote villages to jaw-dropping valleys. For many the eventual destination is the mysterious mountain church of Stepantsminda. Some may only reach the historic town of Mtskheta, and its scenic Jvari monastery, only 12 miles North of Tbilisi. Along the way there are monasteries, monuments, and a lot of impressive nature. Here are some stops along the Georgian Military Highway that you need to know…

Around 70km from Tbilisi, the fortress at Ananuri may not be the most impressive in the Caucasus, though it is being considered as a possible UNESCO heritage site. Built in the 17th century, the earliest foundations were laid four-hundred years before, guarding the Aragvi river valley. However, the view shouldn’t be missed. Nearby the road passes the Zhinvali reservoir, an oasis of blue.

The Village with the best khikali in Georgia

The little village of Pasanauri, with a population of less than 2,000 inhabitants, may not be most celebrated tourist destination in the Caucasus, but its khinkali certainly should be. Khinkali is the national dish of Georgia, and a trip to the region would be incomplete without trying these delicious dumplings. Throughout Georgia this village is regarded as home to the very best khinkali in the country (so much so that a khinkali restaurant in Tbilisi shares its name). If you’re looking for lunch this spot just off the Georgian Military Highway is perfect. Locals might not speak English, so consult our guide to essential Georgian phrases before going!

Gudauri is one of Georgia’s premier snowsports resorts, with plentiful opportunities for skiing, snowboarding, paragliding and more. All year round it’s a great spot for hiking. Above the tree-line, the slopes are regarded as relatively safe from avalanches and perfect for free-skiers. At the very least, stop by for a view down into the valleys below.

Overlooking the Devil’s Valley, this unique monument was built in 1983 to celebrate the Treaty of Georgievsk, two hundred years previous. The tiles depict various stories from Georgian-Russian history. While the monument to the nations’ “friendship” may seem a little odd considering recent history, it’s a strangely beguiling sight and offers terrific views.

The highest point of the Georgian Military Highway is the Jvari Pass (also known as the Krestovy pass, its Russian denomination), named for the cross placed their by Georgia’s famous king, David the builder: a replacement cross was placed there in 1824, and remains today. At almost 8,000 feet, the pass was written about in ancient times, though has been found in its current construction only since Russians began work in 1799. The road is surprisingly decent, though a sudden snow storm can easily make it impossible to pass. Close by you’ll find a cemetery dedicated to German prisoners of war.

To Kazbegi or… Russia?

Not long before the Russian borders, you’ll come across a choice: onwards to Vladikavkaz, or stay in Georgia and see the town of Kazbegi. We recommend the latter, which is also known as Stepantsminda. Perhaps the essential icon of Georgia, read our guide to its mysterious mountain church. It’s worth staying a while to walk among the dramatic mountain valley, overlooked by imposing Mount Kazbeg. Make sure you climb up to Trinity Gergeti Church and admire the view!

Does the Georgian Military Highway sound like a fun adventure? Well, it’s the perfect trip for the rest day of the Caucasian Challenge 2017, the minimal assistance adventure rally. From Istanbul to Yerevan, you’ll drive Georgia’s mountain roads discovering the history, nature, and incredible local hospitality of the region!