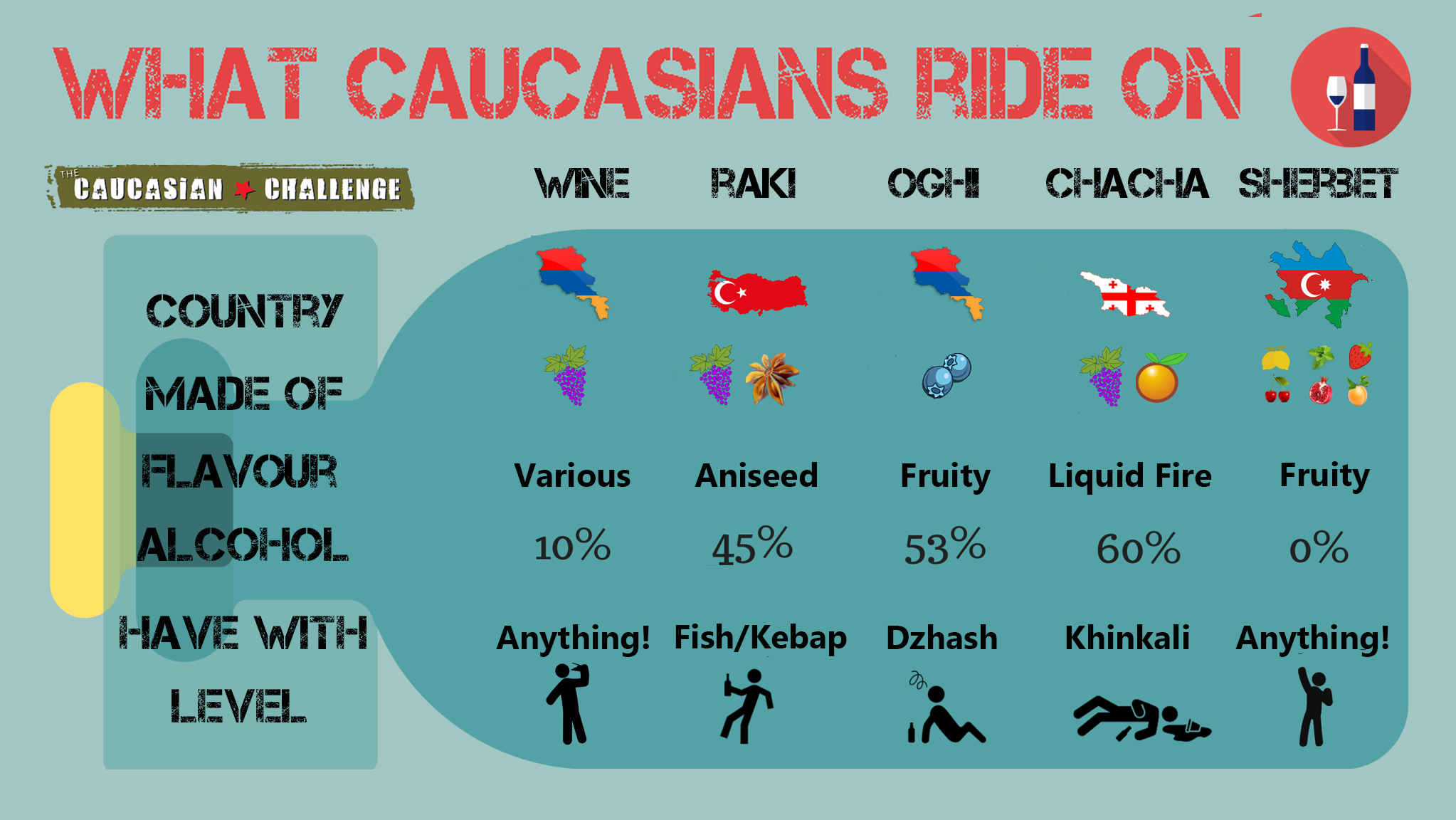 When crossing the mighty countries of the Caucasus, it is important to stop from time to time and get to relax and drinking a cold beverage. Luckily, Caucasian countries have an amazing offer of traditional drinks that you should definitely try- but maybe not all at once.

Armenian wine has the longest history of alcoholic beverages in Armenia, as some of the oldest wineries in the world have been found there. Armenian wine is mostly made from local varietals, such as Areni, Lalvari, Kakhet, although sometimes it is also mixed with international companies like Chardonnay. Their most popular varieties are red and sweet, semi-sweet (Vernashen, Ijevan), or dry (Areni). Every year, there is a wine festival held in the city of Areni, in which you can find both homemade and winery made wines.

Oghi is a kind of brandy that is often drunk in regions of Armenia and Nagorno-Karabakh. It is made out of mulberry, and it results in a liqueur with a rich aroma and a smooth taste. For making it, the brandy is aged in barrels with mulberry and oak for long periods of time, even for years, until they get their proper aroma and taste. In the Armenian Diaspora, when no fruit was getting distilled, Oghi started to refer to an aniseed alcoholic drink that is known as Arak, Raki (see below) or Ouzo in other countries of the area.  It is a strong drink, with an alcohol percentage of 53% that can make your head spin for a while. As side dish, it is recommendable some Dzhash: a typical Armenian dish that consists of a stew of meat, legume, vegetables and spices.

The Armenian Brandy, also known as Ararat (which is the name of one of the most famous brands that produce it), is made from Armenian white grapes and spring water. It is left to age in barrels from different amounts of time (from 3 to 20 years), to get therefore different kinds of brandy, which provokes that each one of them has a very specific taste and golden color. The legend claims that Armenian Brandy was the fuel of diplomacy during the Yalta conference in 1945 between Stalin and Churchill: so much, that after that Churchill would order boxes of Armenian brandy to be delivered to London monthly.

Chacha is a classic drink from Georgia, similar to Brandy. It is so clear and strong that is also called as Georgian vodka or Georgian Grappa. The Chacha is made of the grape pomace or residue which remains after making wine. Sometimes, other fruits can be used such as figs, tangerines, oranges or mulberries. Some Georgians claim that it has medical properties, while others have described it as liquid fire. What is sure is that it has a strong percentage of alcohol (60%), but you can push it down with some delicious Georgian Khinkhali.

Georgian wine is one of the best ones you can find in the Caucasus. According to some researches, wine has been made in Georgia for over 7000 years, and the country has a good wine tradition and some even consider it one of the birthplaces of the drink. Georgia has an amazing amount of different kinds of grapes that they export worldwide. The Georgian wine is still made in a traditional way, mainly by artisans, family business or by the monks in monasteries. Some examples of traditional Georgian wines are the dark red dry Saperavi, or the white semi sweet Pirosmani.

Raki is the name given to the strong traditional Turkish drink, an aniseed distilled schnapps. It has its equivalents in many other Mediterranean countries, such as the Arrak in Lebanon and Iraq, the Mahia in Morocco, the Ouzo in Greece and the Anis in Spain. In Turkey, it is a key element in celebrations, friend dinners and traditional weddings. The Raki, with al alcohol percentage of 45%, is transparent in its pure state; however, when you drink it, you must fix it with some water, and then the drink changes its color and becomes white like milk. It tastes even better accompanied with some real Turkish Kebab or some fresh fish dishes.

From the non alcoholic drinks that you can find in Azerbaijan, Sherbet may be the most delicious, sophisticated and special one. It is typically served after dinner and it can be prepared from many different fruits to give it different flavors: lemon, basil, mint, saffron, aromatic herbs, or berries are some of the most popular ones, although it can be made almost from any kind of fruit that is mixed with water and sugar. It represents a spirit of celebration, and so it is consumed at banquets, traditional weddings, dinners and special events. You can have it with almost any kind of food, but it is often served with pilaf, a brownish type of rice that is cooked in seasoned broth.

It is hard to make a choice between all the drinks from the Caucasus? Join the next Caucasian Challenge and let all of these drinks become your fuel for an unforgettable (although just maybe you will forget some little parts if you take this list to the core) race through the Caucasus!