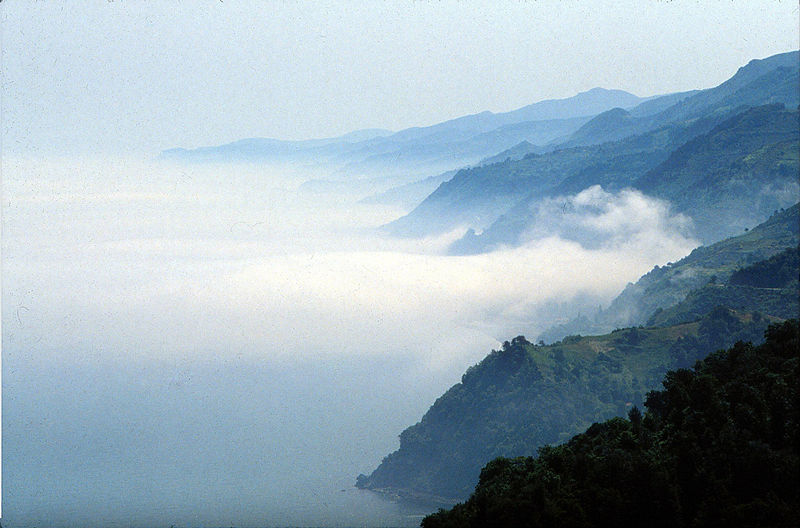 The Black Sea to the north, high mountain ranges to the south – the Black Sea Region of Turkey is many things, but definitely not easily accessible. It is a place of ancient legends – Jason and the Argonauts passed by on their search for the Golden Fleece and it is the home of the most fearsome women of all time, the Amazon warriors and their queen Hippolyte. It is a place of dampness, rain and clouds built up by the mountains, forming an impassable barrier. It is a place of rocky beaches, narrow gorges and lush, green forests and meadows.

Here you’ll find neither much sun, since clouds are more common, nor many tourists – the overcrowded Anatolia seems to be worlds away. This is the right place to start our adventures of the Caucasian Challenge: in a pristine country in the footsteps of ancient voyagers.

The mountains start relatively soft in the west with mere 1500 m but the Kaçkar Mountains close to the Georgian border in the east tower up to 4000 m into the sky, covered with dark forests . Along the narrow valleys and the coast you will find cultural variety and a multitude of ethnicities, from Turks, to pontic Greeks and distant cousins of the Armenians to Muslim Georgians.


But don’t be deceived by the seclusion of the Black Sea Region – its worldwide importance can’t be emphasised enough! Without the main export good of the region your Nutella jar would be empty and Ferrero Rocher would lack its heart piece  and whole nut chocolate would just not be the same. In  2014, Turkey exported more than 252 000 tons of hazelnuts, meeting about 70% of the world demand, and the Black Sea Region of Turkey is one of the main cultivation areas.

The cities along the coast may not have the most complex history or the most beautiful architecture, but they have their own special charm of showcasing the authentic, undisturbed life in the region.


There is Sinop, the birthplace of Diogenes, who gained some fame carrying a lantern and looking for a good man, without ever finding one. He also used to to sleep it off in a barrel and the only thing he asked Alexander the Great for, when he was offered one favor, was to stop blocking the sunlight, so he could work on his tan. He’d have made an amazing team mate for any of our rallies!

Visiting Ünye and Ordu you are in the center of the hazelnut production of Turkey’s Black Sea region. Don’t forget to try some, because you’ll hardly get them anywhere else as good.


Like Jason looking for the Golden Fleece we will pass by Giresun on our way to Colchis – or Western Georgia if you prefer modern names. Since ancient times it is famous for its cherries , which were already exported by the Romans .

Rize and the east in general are a tea growing center, where you can explore the plantations in the green hills.

Did we spark your curiosity for this untouched and fascinating part of Turkey? The next Caucasian Challenge is going to take off soon, so just sign up and join the adventure!