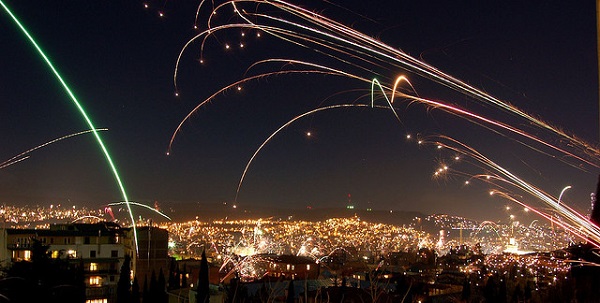 People celebrate New Year’s Eve all over the world. How they do it, and what exactly they celebrate – now that’s where it gets interesting. How do, say, people in the countries on the route of the Caucasian Challenge throw the old calendar away? This is what you would be doing if you were there tomorrow!

Spending time in Turkey around New Year’s Eve, you’ll feel a bit like being thrown back a week right into Christmas celebrations. The decoration has kind of a Christmassy touch, and there are New Year’s Trees (Yeni Yıl Ağaç), which are surprisingly similar to Christmas trees.

Many people enjoy New Year’s Eve among their family, watching TV, playing games and eating and drinking plenty of Turkish delicacies. The ones who prefer parties to a quiet evening can join the celebrations outside with fireworks and street performances.

Don’t be surprised if you see a lot of red underwear looking out from under the clothes. It is a traditional gift, that brings luck if worn when the years change. People also sprinkle salt on the doorstep to attract peace and abundance. The latter can also be achieved by letting the tap water run at 12. If you go for a walk, you invite travel into your life.

Georgia – By the Beard of the Saint

For New Year’s Eve only the best food is good enough, be it for the traditional khachapuri or for the bowl full of fruits, nuts and Churchkhela, a traditional sausage shaped candy. The main course can reach from fried pig to turkey and is perfected with some homemade wine.

Like almost all over the world, fireworks with light up the sky at midnight, accompanied by loud bangs, to shoo away evil spirits.

Lucky is the year’s first guest in a house, the Mekvele. Besides a basket with food he or she brings joy, happiness and prosperity with him, and in return is drowned in a sea of sweets. Of course this important task can’t be left to chance, so the first guest is carefully selected in advance.

There are many different traditions in different parts of Georgia, but one is followed everywhere: Guns are shot at midnight of New Year’s Eve, luckily just into the sky.

Another common sight are the traditional New Year’s trees, chichilaki, made of fir or pine wood, which are said to resemble the beard of Saint Basil, whose name day is on 1st January.

Armenia – Where Pastries Tell Your Future

Like in many countries, christmas and new year’s are just a 2 weeks marathon of eating, meeting friends and family and exchanging gifts. The Christmas holiday season starts officially on New Year’s Eve and continues until the old Julian calendar’s New Year’s Eve on January 13th.
While New Year’s Eve is still mainly a family holiday spent a home, things are slowly changing, shifting the celebrations to restaurants with show programs.

After an old tradition groups of children are wandering through the streets, singing for their neighbours in exchange for fruits and gifts. Also within the family gifts are exchanged. Interestingly the wifes never receive gifts from their husbands. Sounds like paradise, doesn’t it?

In former days it was a “Baboushka” or grandmother who brought the presents to the children, but during communist times, when religious celebrations were discouraged, the tradition shifted to New Year’s Eve, when Grandfather Frost brought the gifts. Still today Father Christmas is the one who makes the children’s eyes glow with his gifts on New Year’s Eve.

Of course food is a must, like for every big celebration. Darin is a traditional pastry, one piece of it usually has a coin hidden inside. The lucky one who finds it (and probably almost loses his teeth while doing so), is that member of the family, who will bring luck to the family throughout the next year. Also dolma, made of grape leaves and rice, are a popular part of the New Year’s Eve meal. Main courses are often pork leg and turkey.

People believe that on the last day of the year the doors to other worlds open, which also helps foretelling the future. And obviously the future manifests in the delicious pastries: the puffier the pastries become, the better the next year will be.