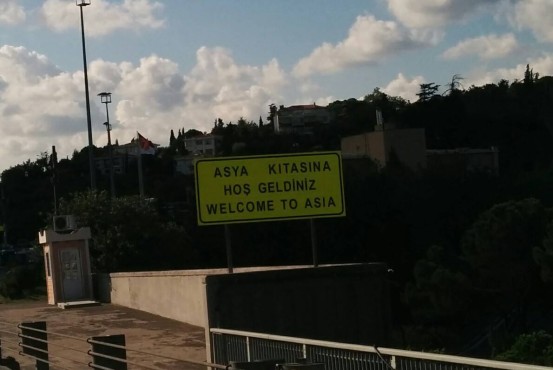 When you’re on the Caucasian Challenge, sleeping in is not an option. At least not on the first day, when we have a 734-kilometre drive ahead, and there are so many things to sort out before we actually take off.

We meet in the hotel lobby early in the morning, welcome everyone with a short speech, introduce the teams, go over some basic rules and hand out welcome packages: t-shirts, stickers, and safety instructions.

We have to dive into the Istanbul traffic again. We know better than to leave between 7 and 8 am, because that would be pretty much a suicide mission. We’ve been through this so many times before that we’re smart and experienced enough to know exactly when it’s best to take off, so the Caucasian Challenge convoy leaves at 9.30, when traffic is not so heavy.

We cross the Bosphorus Bridge and slowly leave civilization behind, as we start off on a highway with beautiful mountains along the road. The breathtaking view is occasionally blocked by some of Turkey’s largest industrial centers, but they cannot spoil the magnificent scenery. It feels like you’re breaking free.

We were hoping to take a break from driving in the Caucasus to have lunch at our usual spot, a cozy restaurant which used to be located on our route back in the old days. But things have changed a lot since we’ve last been here and what do you know? The new highway built by the Turkish authorities is forcing us to drive in a different direction. Eventually, we decided to have lunch at a restaurant in the middle of nowhere, and this was just as good. The members of the crew filled their bellies with delicious lamb and veggies.

The plan was to continue driving until we reach the camping spot in Sinop, but the construction workers got in our way once again. The route to the entrance of the camp was altered, so it took a while for us to find it. At the end of the day, everyone arrived at the beach safely. This is where we introduce everyone joining us on this exciting journey to one of our favorite spots in the city: the very hospitable Marti Plaj Camping, managed by one of the most cordial hosts you can wish for, who has become our friend over the years.

The German team members were the first ones to get there, and they decided to spend the night in a bungalow since the weather was far from sunny and tropical. Sinop is definitely not that type of beach, and no one really likes rain. Not even us. We reached the camp soon after them, then came the two Dutch teams, the Hungarians and the Danish. It’s slowly becoming a tradition for them to be the last ones to arrive to our meeting spots. They were also brave enough to camp outside, despite the bad weather.

Once everyone was there, preparations were made for the official welcoming party. We had a huge feast with fish, kofte and chicken. And, of course, Denis took care of the most important part: hydration. The Russian proved he knows his booze, and took out the bottles of whiskey, rum, vodka. The Danish brought bitter, but not everyone was a fan of that. After tasting it, Aravind creatively described it as something which tastes like endocrine fluid.

With delicious food and drinks, the party went on until 2 am. We shared stories, had a bunch of laughs, and enjoyed this pleasant night before preparing to drive another 768 km the following day. The Danish wanted to make the most out of this wonderful experience and were the last ones to go to bed.

Good luck getting up early tomorrow!