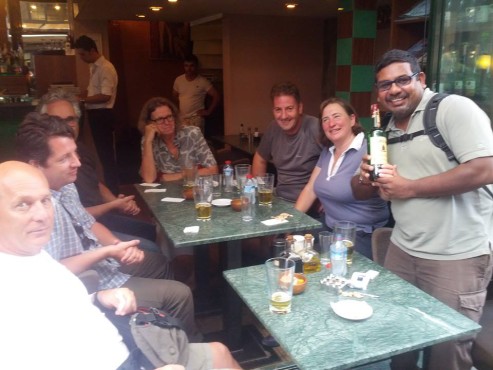 A lot of excitement has built up over the past few weeks, as we’ve all been eager to embark on this adventure. But the day we’ve been looking forward to has finally come. We’re here in Istanbul and we love it.

This is where it all begins, this is ground 0. The adventure will take us over the Bosporus channel through Turkey, to Georgia’s Adjaran Autonomous Republic, past the 5000-meter high peaks of the Greater Caucasus, and through the canyons of the Lesser Caucasus. Then we’ll be heading to Armenia and Karabakh, aiming for the finish line in Yerevan.
Nine teams have signed up for this year’s rally, and eight of them showed up. Apart from our team, The Travel Scientists, there are two groups from Hungary (Fogcentrum and Rabbit Software), two from Denmark (Suicide Sally and Terkel in Trouble), and two from the Netherlands (Carpe Nøctem and Oh moeders, wat is het hoog!!).  Then there’s Christian and Christina from the German team Oachkatzl, who have been with us on the Central Asia Rally in 2013.

Of course, we had to survive a 70 km traffic jam before we got to the meeting point, but the reward was worth the effort. Istanbul is known to have as the second worst congestion in the world, so making it through the heavy traffic was a challenge in itself, to put it mildly. But once the Turkish traffic terror was over all teams made it to the beautiful Hotel Fatih (photo), where we all checked in, safe and sound. Fogcentrum were the first ones to get there, followed by The Travel Scientists, Oachkatzl, Rabbit Software, the two Dutch teams. The Danish ones took their time and got there last.

It turned out to be a fun gathering, where we met newcomers and caught up with old friends. We were very happy to see Simon and Anne, who have done all of the 3 Travel Scientist rallies with us (the Caucasian Challenge, Rickshaw Challenge, and the Central Asia Rally). They stopped by to wish everyone well for this year’s trip, and then they flew to Bishkek. As we sat around the table talking about the good times we’ve had together, we realized that these rallies are not just about driving; they’re about making new friends, exploring new cultures and most of all delicious food and drinks!

We got to do some shopping, and we explored this fascinating city located where Europe and Asia collide. The hotel where we stayed was very welcoming, and as we were going up to our rooms we were all thinking we deserve a good night’s sleep before we embark on our adventure in the Caucasus. After all, it will be a while until we sleep in such a comfortable bed again.