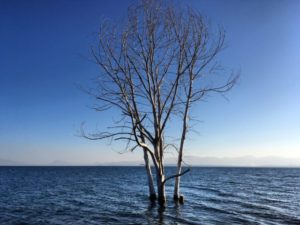 Occupying 5% of Armenia’s landmass, Lake Sevan is undoubtedly one of the largest bodies of fresh water in the South Caucasus. Not only that, it’s also one of the highest fresh-water lakes in the world too.

But beyond the impressive statistics, Lake Sevan is one of Armenia’s most beautiful regions, spreading out across a region encompassing 940 square kilometers with centuries of complex history, ancient monuments and stellar beaches, which make up for Armenia’s lack of coastline.

Since Lake Sevan is a large area, we’re going to break down the main sights and activities in the area for your next visit.

The former island monastery of Sevanvank is perhaps the most photographed part of the lake.

The 9th century monastic complex now lies on a peninsula, after civil engineer Soukias Manasserian, one of those responsible for the Aral Sea disaster, recommended using the lake for irrigation. Under Stalin’s dictatorship, Manasserian’s plan was carried out and caused the lake to lose approximately 20m in depth. Unlike the Aral Sea tragedy though, Lake Sevan was saved when the Stalinist era ended in 1956.

The conical towers of the monastery sit against the backdrop of perfect blue water may look idyllic, but it was once a place of penance, a place of exile for monks from the religious capital of Echmiadzin who were guilty of sinful acts.

If you visit one site in Armenia, then make sure it’s Sevanavank, since it’s one of Armenia’s iconic landmarks.

Located further down the shore from Sevanavank, the cemetery of Noratus spreads out across a plain with the largest collection of khachkars, Armenian cross stones, in the country. Some of the cross stones date as far back as the 10th century and each one tells a unique story. A wander round this huge village cemetery offers a glimpse into the past lives of the region’s inhabitants.

From afar, the khackars resemble an army poised for battle, so it’s easy to see how a local folk tale arose, in which the villagers dressed the stones up in clothes and helmets to protect the village from the invading army of Tamerlane.

The vast cemetery is one of Armenia’s most interesting sites, and is a short drive from Sevan town, and feels rather magical at times. However, the peddlers on site selling knitted goods can get a little tiresome and are likely to follow you around the site.

Perched on a rocky outcrop above the lake, this 9th-12th century monastery is one of the lesser-visited sights surrounding Lake Sevan.

It may not attract the crowds the way Sevanavank does, but it’s still just as attractive a site as its more famous neighbor.

Hayravank is actually comprised of two sections. The 9th century church and 10th century chapel are the older part of the complex, whereas the gavit was a 12th century addition to the complex.

If you’re not sick of khachkars after Noratus, then you’ll find some interesting pieces scattered around the site.

Also, if you’re hungry for more monasteries, then check out the Makenyats and Vanevank monasteries.

Armenia might be landlocked, but that doesn’t mean that you can’t enjoy a day at the beach. The lakeshore is lined with sandy beaches, making Lake Sevan the hotspot for Armenians in the summer months.

Like any good beach, you can sunbathe, swim and also partake in watersports, like sailing, jet skiing and windsurfing.

Lake Sevan’s proximity to Yerevan, coupled with its cooler summer temperatures, outstretched blue waters and historic sights make it one of Armenia’s key regions to visit.