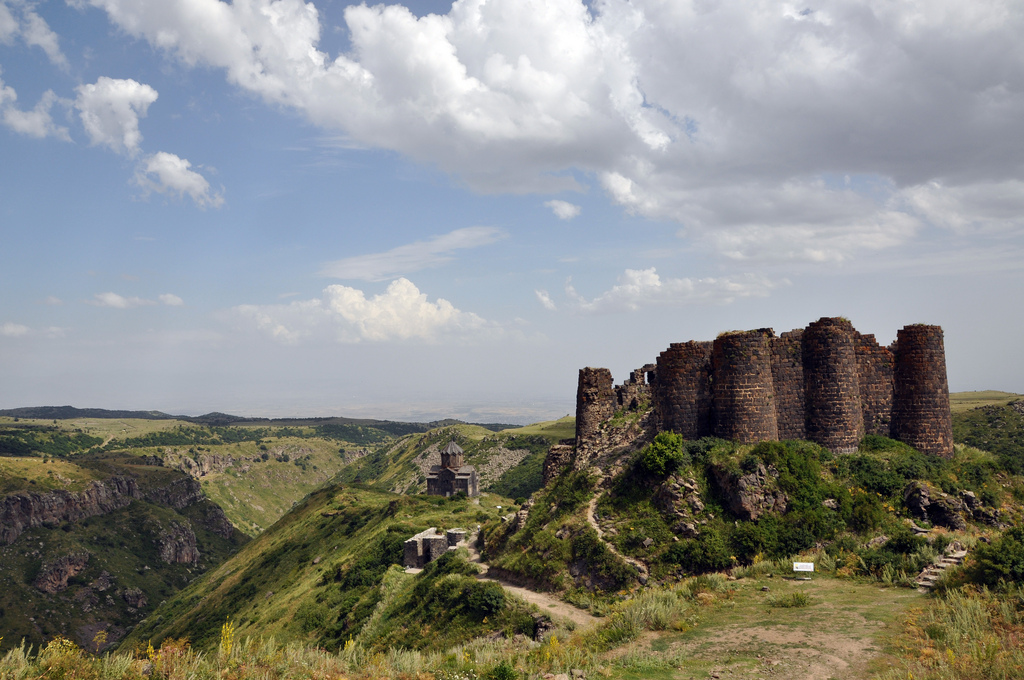 Armenia, the cradle of Christianity in the heart of the Caucasus, is untouched by mass tourism and still a paradise for independent travelers and adventure seekers. So why not stay for a while after the Caucasian Challenge crosses the finish line in Yerevan, and explore the towering mountains, the wide valleys and the ancient history of this small, landlocked country for a few days? With our 5 top places to visit in Armenia, you definitely can’t go wrong!

Amberd, with 2300m above sea level called the “Fortress of Clouds”, greets its visitors on the slopes of Mount Aragats with the snow covered giant as striking backdrop. Inhabited since the stone age, the ancient settlement developed over time into a fortress, till the current castle was built in the 7th century. While still some parts of the fortress are original, many other parts have been expanded and overbuild over the centuries. The site also includes an 11th century church and a bath house with heated floors and warm water, which provided the residing noble families with some extra comfort.

The fortress was finally destroyed by the Mongols in 1236 and only in the 20th century some reconstruction work has started.

This fortress and its epic setting should definitely be high on the to-do list for your adventure in Armenia. Take in the ancient history, the breathtaking views and let a new humility fill you facing the perishability of all things man-made in front of imperishable Mount Aragats tauntingly rising up to the sky.

After all that history, why not conquer the giant itself? Aragats, an older volcano, is with 4095m above sea level the highest mountain in Armenia and inviting for every passionate mountaineer. The best climbing time is between the middle of July till the middle of September, when there is less snow.

There are 4 peaks waiting for you, the northern peak the highest one, and the souther peak abuot 200m lover. It is recommended to rise early, to avoid the cloud formation, that sets in in the late morning and blocks the great view. Start at Amberd Fortress and head to the southern peak. It is a rather short hike, which should take you only about 2 hours. You can hike all four peaks, but the other ones are a little more difficult and a full round trip will take you up to 13 hours. So dress warmly and before you start for a full tour, ask yourself some honest questions about your level of fitness.

After climbing Armenia’s highest mountain, your body has deserved a little rest, but not so your mind! Head to Armenia’s capital Yerevan, which is only 40 km away, and visit the Matenadaran Research Institute and Museum. This repository of ancient manuscripts, which is in possession of more than 40 000 ancient scripts and documents, some dating back as far as the 5th century, in various languages covering all kinds of topics like history, philosophy, medicine, literature and many others, written by saints, scholars, scientists and early writers, is an incredible and irreplaceable collection of humanity’s cultural heritage. Since 1997 it is part of the UNESCO Memory of the World Program.

Not only the scripts are ancient, but also the idea of collecting them in a place of knowledge. The collection was started already in the 5th century in the Etchmiadzin Cathedral. After being pillaged more than once from medieval times till the 19th century, and after a detour to Moscow during World War I, the foundation of today’s collection was finally stored in the current building, which was built specifically for this purpose.

Noratus Cemetery  is an almost seven hectare big field which is covered by almost a thousand khachkars. There is probably nothing else, which is so characteristic for Christian medieval Armenian art like khachkars, their symbolism and the craftsmanship itself are even part of the UNESCO list of Intangible Cultural Heritage.

These memorial steles came into fashion around the 9th century and the craft is still alive. Unique ornamentation is carved into the khachkars, usually a cross with other motives like interlaces or botanical inspired patterns. They had various functions from saving a person’s soul to commemorating a victory.

Noratus Cemetery can be found in the Gegharkunik Province, about 95km from Yerevan. We recommend to explore the area with a guide, as otherwise it is almost impossible to get an overview and an understanding of the several hundreds of khachkars from the 9th to 17th century.

The probably most significant pilgrimage site Armenia’s lies just 8km east of the Turkish border, on a small hill in the Ararat Valley. At the end of the 3rd century, a famous prisoner was held here for 13 years: St Gregory the Illuminator – or Grigor Lusavorich. But after St Gregory had healed him from sickness, the Armenian king converted to Christianity in 301, granting Gregory the right to convert the  whole country and as legend tells, within one year Armenia became the first fully Christian nation in history.

Used as a prison in ancient time, a chapel was build in 642, which over time was expanded to a monastery and finally in 1662 a bigger church was built over the old chapel. The pit deep down in the earth, in which St Gregory was allegedly imprisoned for 13 years of his life, can still be visited inside the chapel