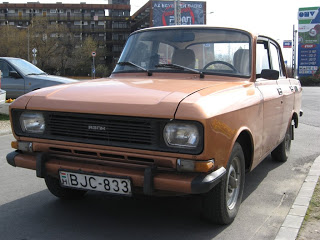 We proudly present the new company car of the Caucasian Challenge office.

I’ve found this beauty on the net 2 days ago and bought it next day. This was an impulse purchase – love at first sight.
We needed a promotional vehicle anyhow, and I was sure I didn’t want a nice 4WD. I needed something that reflected the vision and the characteristics of the Caucasian Challenge.
Here we go. This is a 1988 Moskvitch, the pearl of the Soviet automotive industry.

First owner, metallic paint, interior in amazing condition, we even have the original user manual and spare keys. And a spare tire in the trunk. See the number plate and the small lock above? You open the lock, release the number plate (it’s a small door underneath) and you fill up the tank over there. No left side or right side filling problems. Do it from behind. Lovely! If you want to know more about the Moskvich check out this page and also this one. An interesting info I found today:
“In 1972, Tony Lanfranchi won the British Saloon Car Championship with a (Moskvitch 2140), not by winning races overall but by dominating his class. The class divisions were based partly on price; Lanfranchi realised that a car with essentially a BMW engine but costing a fraction of its price would be a highly competitive proposition (as it would generally be competing against much smaller cars in its class); he took 28 out of 29 class wins that year.”

I seriously consider promoting her as the official pilot car for the Challenge. Let’s see how she’ll behave today. We go for a night rally from Budapest to Bázakerettye (yes, that’s the real name; some village near the end of the world in South-West Hungary). We signed up in competition category. We’re pretty sure we’ll win the race.