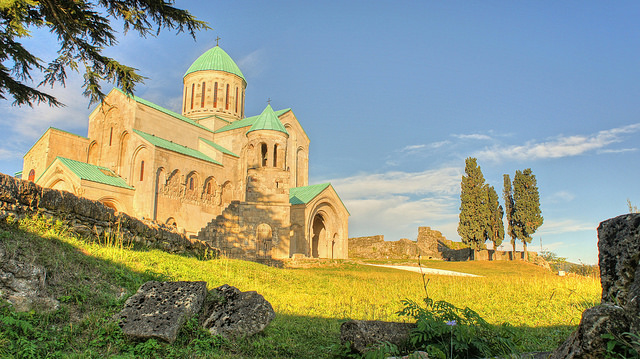 The city of Kutaisi is the second largest city of Georgia, only after the capital Tbilisi. However, its history goes back to ancient times where legends and reality get mixed: Kutaisi, capital of Colchis, was the land where Jason and the Argonauts arrived in their search for the legendary Golden Fleece.

During the VI and V centuries BC, Kutaisi used to be the capital of the kingdom of Colchis – a kingdom famous in Greek mythology as the place where Jason and the Argonauts had the most memorable of their adventures: the search of the Golden Fleece, and the three tasks Jason had to go through to get it. Several historians believe that Apollonius Rhodius, author of the epic poem Argonautica that narrates the adventures of Jason and his crew, considered Kutaisi to be the final destination of their journey as it was the residence of the king of Colchis, Aeetes. Kutaisi (known as Aia at the time) was, therefore, also the home of the mystical Golden Fleece of the story.

The tale of Jason and the Golden Fleece starts with his evil uncle, Pelias. Hungry for more power, Pelias killed his brother, King of Iolkos and father of Jason (who was a child at the time) and became king of Iolkos. Years later, when Jason as a grown man came back to reclaim the throne from his uncle, Pelias came up with a plan in order to keep Jason far away from Iolkos for a long time, hopefully forever: he sent him to find the legendary Golden Fleece, which was in the property of King Aeetes of Colchis.

Therefore, brave Jason arranged a crew (whose members would be known from then on as the Argonauts) and a boat, the Argo, and set sail for a great juorney that would take them across today’s Turkey, Greece and Georgia. After countless adventures, they arrived in Kutaisi and Jason could meet the king.

King Aeetes promised to give Jason the Golden Fleece if he could pass three impossible tasks of his choice. He would have to yoke the fierce Khalkotauroi, huge bulls that breathe fire, and use them to plough a field as the first task; the second would be to sow the fields with dragon teeth; and, if he could manage to do the first two, he would gain access to the Golden Fleece, but, to seize it, he would have to pass through the fierce Sleepless Dragon that was guarding it. It seemed like it was impossible to any human to complete these tasks and survive the attempt.

However, Jason managed to succeed in Kutaisi thanks to the help of the King’s daughter, Medea, who fell in love with Jason and helped him to overcome the obstacles with her sorcery powers. The goddess Hera, protector of Jason and the Argo, acted as Cupid in this love story, to secure Medea’s support for Jason. Medea provided Jason with an ointment that would protect him from the bulls flames and a potion that would make the Sleepless Dragon fall sleep. She also taught him how to defeat the skeletons that would come out of the dragon teeth sowed in the fields.

The adventures of Jason in Kutiasi ended there, as after having the Golden Fleece in his power he returned home along with Medea (who killed her own brother to distract her father from chasing them during their escape) and the rest of Argonauts. However, the story of Medea and Jason didn’t end so well after all. Jason replaced her soon enough with the Princess of Corinth, Creusa. This provoked the wrath of Medea, who sent Creusa a cursed dress that burnt her to death. Eventually, Jason died alone in the Argo, but his adventures and stories would survive for the eternity, being the most famous the chase of the Golden Fleece in Kutaisi.

It is said that the basis for the story of the Golden Fleece could have been an ancient Georgian tradition. This tradition was practiced in the rural areas and mountains of Georgia, where alluvial pieces of gold were collected in the rivers by using large sheep fleeces that would keep the pieces of gold trapped on them while the water could pass trough. The result was, therefore, a sheep fleece covered in gold.  The Golden Fleece features also in the coat of arms of Georgia in connection with Jason’s adventures in Kutaisi. It consists of a yellow-golden death sheep from which pieces of fleece fly above the sheep upon a green background. A statue of Medea holding the Golden Fleece can also be found in the Georgian coast city of Batumi, next to the Black Sea from which she, Jason and the Argonauts escaped the Kingdom of Colchis.

Are you eager to live an adventure of your own? Emulate the Argonauts and join the crew of the next Caucasian Challenge to race across Georgia, Armenia, Turkey and Nagorno-Khabarak in a kick ass adventure that, just as the one of the Golden Fleece, will not be soon forgotten!